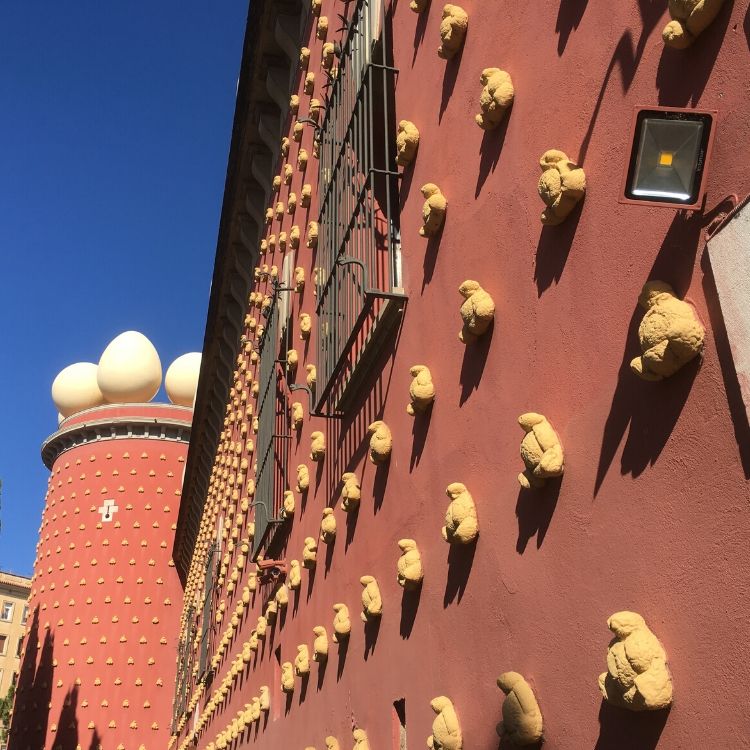 If you’re a Salvador Dalí fan, then let me tell you about three sites you can’t afford to miss! So first of all, get yourself to the gorgeous Costa Brava in Spain. Perhaps you’re a city break traveller? Head for Barcelona or Girona. Alternatively, head for one of the lovely coastal towns or villages along the coast.

>> Check out this post on some of our favourite beaches in the Costa Brava! <<

My first piece of advice is that you really shouldn’t try to visit all three sites on the same day – you would be doing them an injustice. Rushing from A to B to C and not giving yourself enough time to take it all in.

You’ll most likely have heard of the world famous Salvador Dalí Theatre Museum in Figueres but what about Dalí ’s house in Portlligat or his wife’s castle in Pubol? These three sites are often referred to as the Dalinian Triangle or the Dalí Triangle and are all located in the Costa Brava. Check out the map below to find out their exact location.

Tip: As you can see from the map, the 3 sites are located at quite a distance from each other making it very difficult to visit all three on the same day. Don’t even try!

Who was Salvador Dalí? 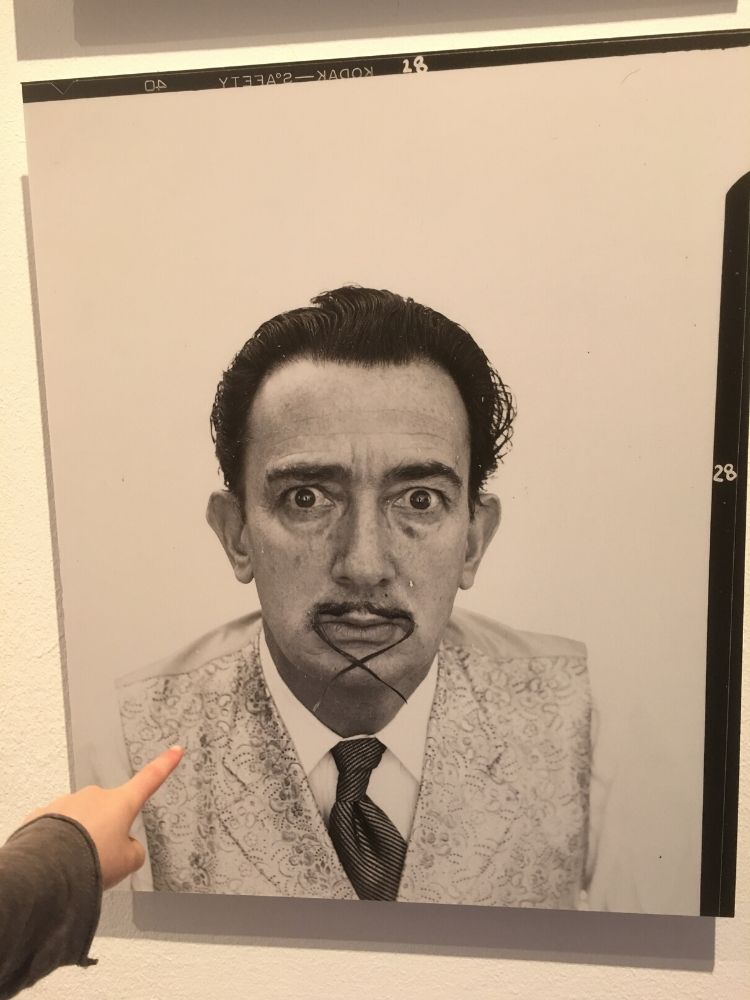 If you’re reading this post, there’s a good chance that you’ll already know a little about this famous eccentric, surrealist painter. However, here’s a quick snapshot of the life of Salvador Domingo Felipe Jacinto Dalí i Domènech (in case you wanted to know his full name).

The artist was born on 11th May 1904 in the Catalan town of Figueres. In a spooky twist of fate, he was born 9 months after the death of his older brother (also named ‘Salvador’) and was told by his parents that he was his brother’s reincarnation.

From a young age, he displayed strong creative abilities and ended up studying fine arts at the Real Academia de Bellas Artes de San Fernando in Madrid. He became interested in a number of art styles including Dadaism, Cubism and Metaphysics and eventually joined the surrealist movement in the late 1920s. Contrary to popular belief, he wasn’t one of the founders of surrealism and was in fact expelled from the surrealist community due to his fascination with Hitler.

In 1929, he met his muse, his forever love, Gala… the only hiccup was that she was already married… to French writer, Paul Eluard. The young surrealist painter and Gala – who was ten years his senior – fell madly in love and started a liaison. Eluard accepted this relationship as he and Gala had an open marriage. Eventually, in 1934, Gala and Dalí got married and remained together for over 50 years (although both had lovers during the course of their marriage).

READ MORE: Click here to find out more about the Castle that Dalí gifted to Gala.

Dalí was a prolific artist, marketing genius and shrewd businessman. During the course of his lifetime, he lived in Catalonia (Spain), France, the United States and produced a tremendous amount paintings, drawings, sculptures, films, photographs. In 1931, he produced one of his best-known paintings The Persistence of Memory. He was flamboyant, eccentric and loved being the centre of attention. He famously claimed that “the difference between me and the surrealists, is that I am a surrealist”.

In 1982, he lost the love of his life, Gala, who died aged 87 leading him on a downward spiral of depression and isolation. In a bid to remain close to Gala, Dalí took up residence in Gala’s castle in Pubol but following an electric fire – which resulted in severe burns – the artist moved to one of the annex tower’s (Torre Galatea) of his museum in Figueres. He died of heart failure in 1989 at the age of 84 and was buried in a crypt in the museum.

The Dalí Museum exterior with its trademark eggs and croissant façade.

This is the most famous of the Dalí sites and is located in Dalí’s birth town, Figueres. The building, designed by Dalí, is a work of art in itself. In the words of Dalí “I want my museum to be a single block, a labyrinth, a great surrealist object. It will be a museum that is theatrical to the extreme. Those who come to see it will leave with the feeling they have been dreaming.” It was inaugurated in 1974 after being built on the remains of the former Figueres theater (which had been burn to the ground during the Spanish civil war). Dalí chose to be buried there in a crypt under the stage.

We visited the museum with the kids for the first time back in 2013 and although our son (6 at the time) loved it, our Duracell-bunny daughter of three, ran around and demanded to be taken back to all the ‘ride-ons’ in the town. Note to parents: be warned, the streets of Figueres are lined with these merry-go-round ride-ons so walking down the street can take a looooong time!

If you’d like to get a taste of what your visit will look like, you can always embark on a virtual tour of the museum. Click here to check it out! 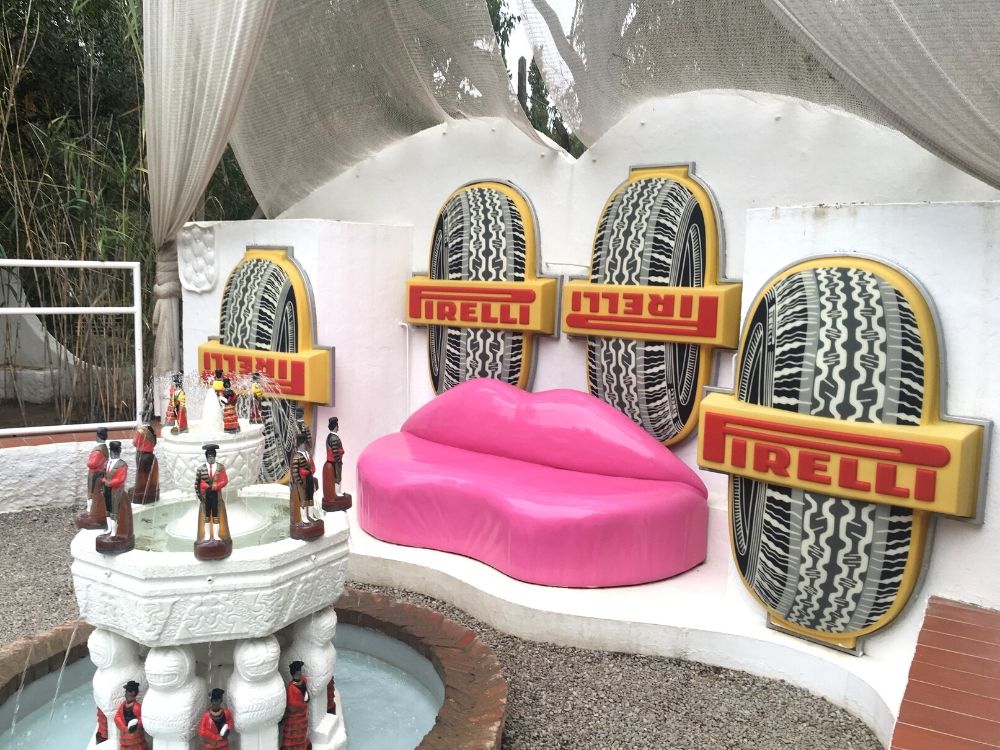 Dalí’s trademark lip sofa! This area is located next to his phallic-shaped swimming pool.

Next, we head to the coast… When you reach the tiny fisherman’s village of Portlligat, you’ll quickly understand why Dalí chose to base himself there. The house, which is made up of 7 fishermen’s interlinked cottages, overlooks a gorgeous bay. I can’t imagine what it must’ve been like to have Dalí as a neighbour!

Book your tickets for a specific time slot and join a guided tour with another small group of visitors. As you enter the property, you’ll be greeted by a stuffed polar bear… and that’s just the beginning. A guide will take you from room to room sharing all kinds of fun facts about Dalí including the fact that the artist used to keep crickets in a cage in his room as he loved the noise they made. You can wander around freely once you’re in the outside space. 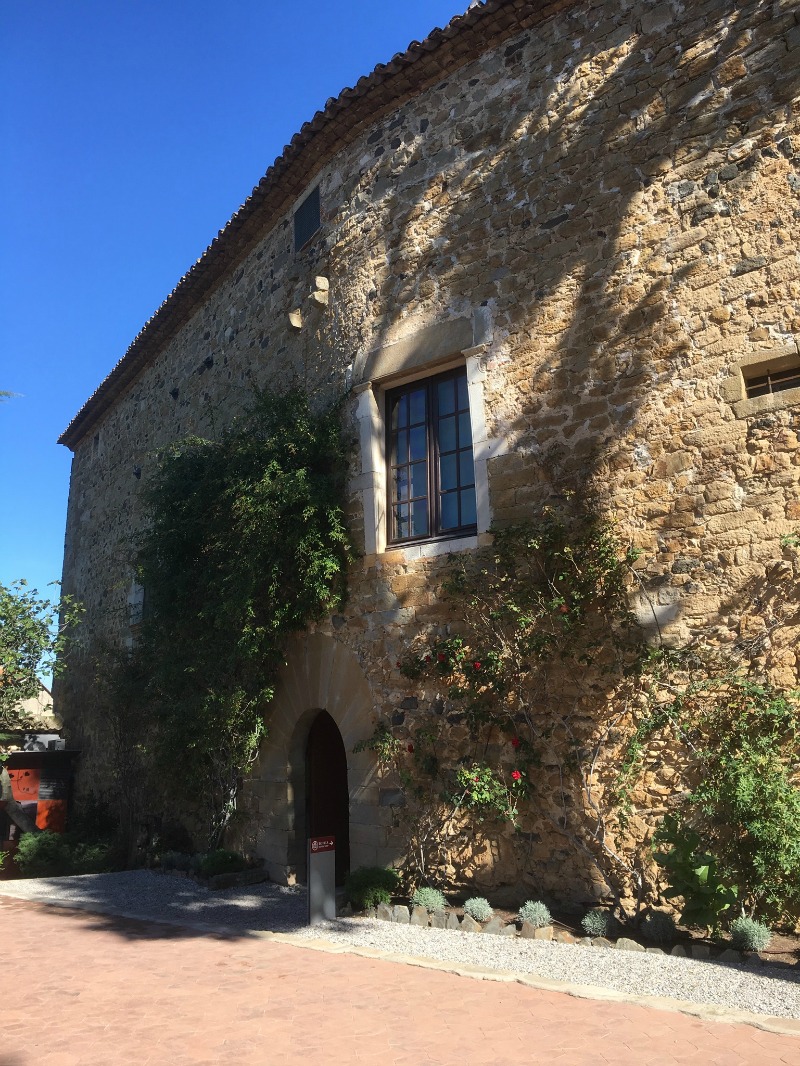 Gala was both Dalí ’s wife and his muse. A visit to Gala’s 12th century restored ‘Castle’ offers a fascinating insight into their relationship. Dalí gifted the house to Gala after promising to buy her a place in Italy in the 1930s and never being able to follow through with his offer. Due to their advancing years, he decided that it was better to buy a place closer to home and opted for a property in the Costa Brava, 30 minutes east of Girona. Gala accepted his gift on one condition – that he only come to the castle upon a written invitation from her.

This is no ordinary home… ! You’ll be greeted by a full sized stuffed horse in the entrance lobby and you’ll discover giant animal chess pieces in the cellar as well as whimsical elephant statues in the garden. The property, more house than castle, is captivating – particularly the interior where you see Dalí ‘s strong influence on the design and decor. As a visitor, we’re offered a window into the life of this far from ordinary couple – Dalí ‘s genius, madness and surprising sense of humour. This is also the place where Gala spent the majority of her last ten years of her life. Allow about 1 hour to visit Gala’s home.