You are here: Home / Travel / Gala Dalí’s Castle In Púbol – Dalí’s Gift to His Muse 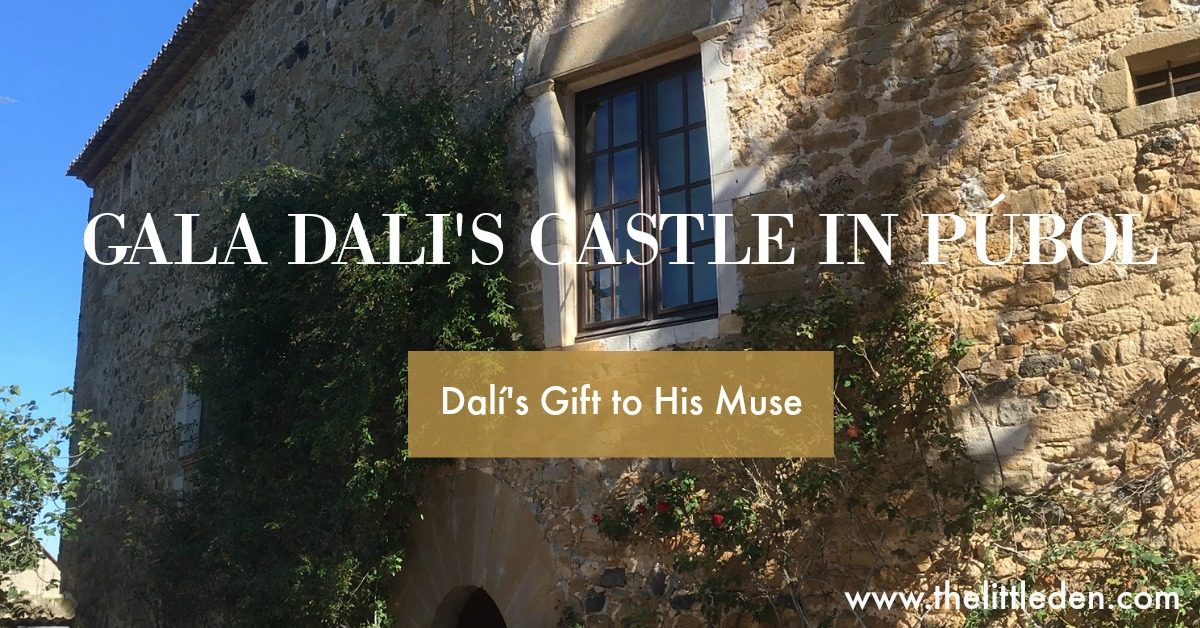 Who was Gala Dalí?

You’ve no doubt heard of the world famous surrealist painter, Salvador Dalí, but how much do you know about his wife and muse, Gala? We visited Gala Dalí’s castle in Púbol and found it to offer a fascinating insight into the couple’s  somewhat unconventional relationship! For a start, Gala would only accept Dalí’s gift of the castle on the condition that he only come to visit upon her prior written invitation.

Gala was born Helena Ivanova Diakonova in Russia in 1894 to a family of intellectuals. She met Salvador Dalí in Spain whilst married to French writer Paul Eluard. The young surrealist painter and Gala – who was ten years his senior – fell madly in love and started a liaison. Eluard accepted this relationship as he and Gala had an open marriage. In fact, they had even spent three years in a ménage à trois with Max Ernst in the mid 1920s! Eventually, in 1934, Gala and Dalí got married and remained together for over 50 years (although both had lovers during the course of their marriage). Dalí remained devoted to Gala til her dying day. She was his muse, his raison d’être and she played a large part in his success as an artist and businessman. She inspired not only Dalí but many other artists and she featured in a great number of Dalí’s works.

We didn’t know much about but this 12th century restored house, however, we wanted to complete the Dalinian Triangle as we’d previously visited both the museum in Figueres and Dalí’s house in Portlligat. We visited on a warm autumnal day and were surprised at how quiet the site was – at least in comparison to the museum and his house. We were very glad that we’d included this intriguing castle in our Dalí trail and highly recommend that you do too!

READ MORE: Check this post to find out more about the Dalinian Triangle – the three must-visit Dalí sites in the Costa Brava.

From a full sized stuffed horse in the entrance lobby to giant animal chess pieces in the cellar and whimsical elephant statues in the garden, this is no ordinary home. The property, more house than castle, is captivating – particularly the interior where you see Dali’s strong influence on the design and decor. As a visitor, we’re offered a window into the life of this far from ordinary couple – Dali’s genius, madness and surprising sense of humour. This is also the place where Gala spent the majority of her last ten years of her life. 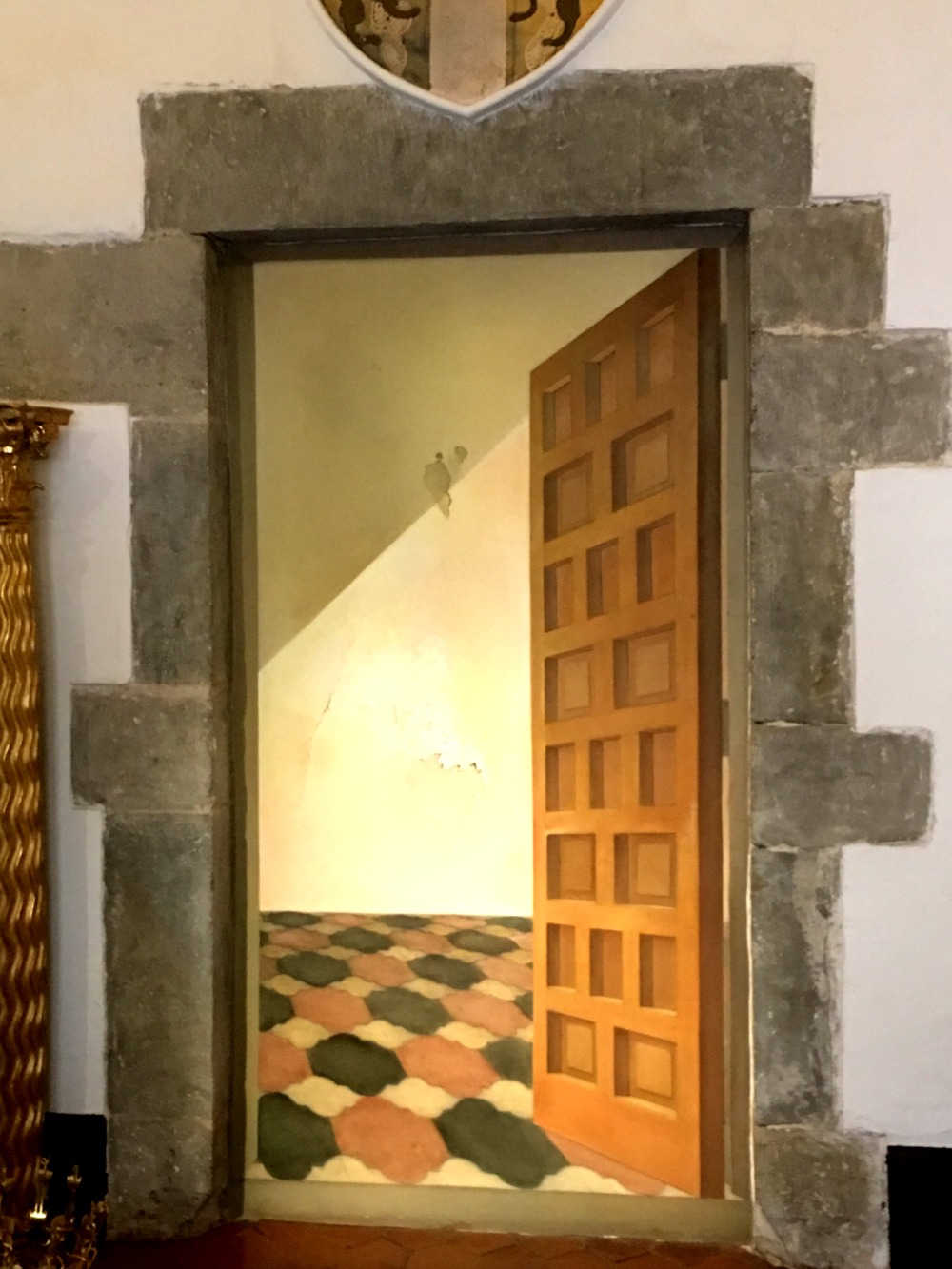 Doors where there are no doors. Dali plays with his trompe-l’oeil paintings. 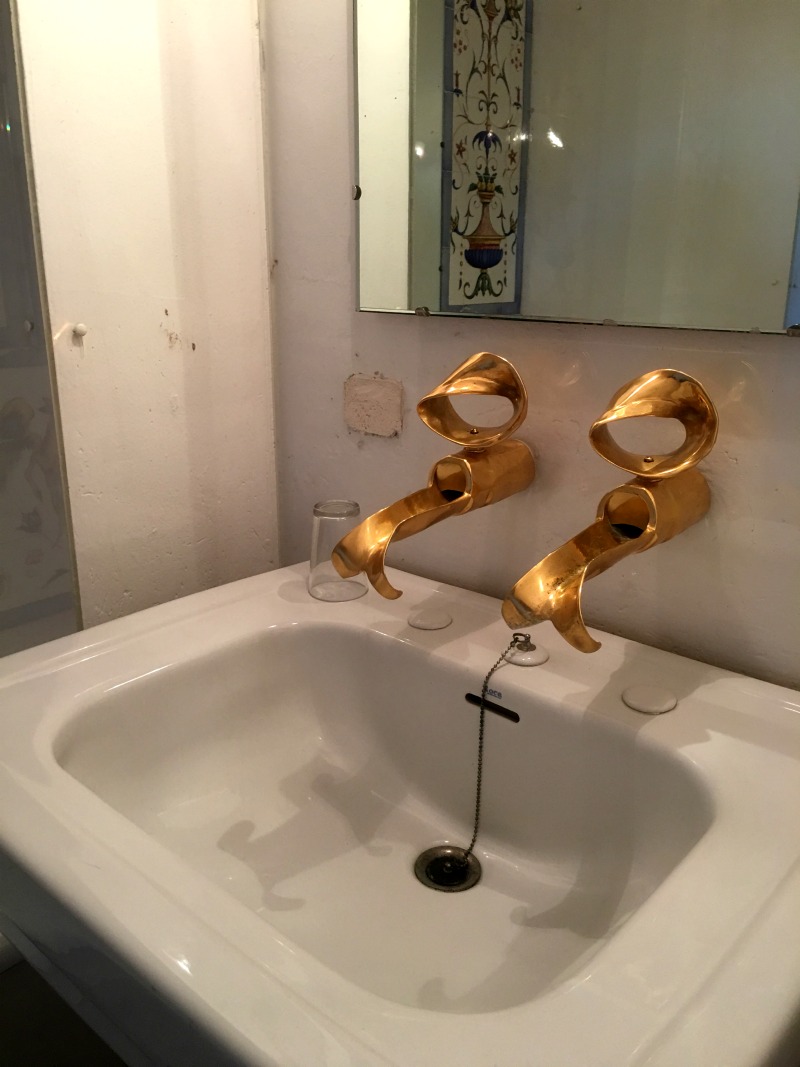 There are some interesting parallels and themes which repeat themselves across Dali’s work. This fireplace is identical to the one in their house in Portlligat. It’s in the shape of a drop of water before it lands. 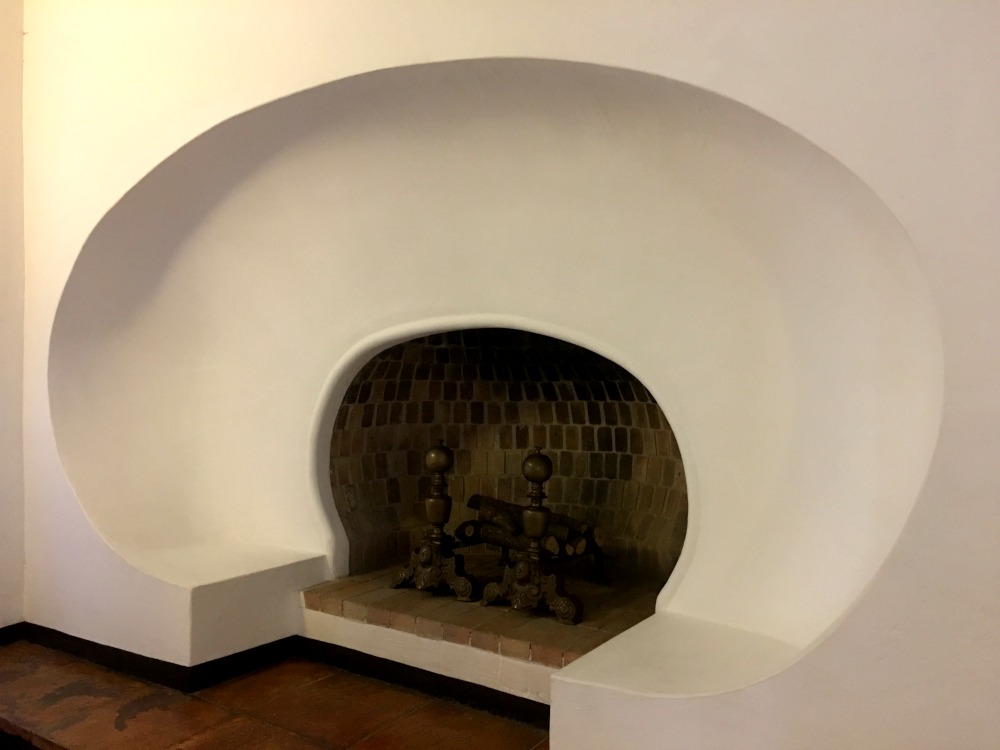 You can see the left hand fireplace is in the shape of a ‘G’. There is a mirror copy on the right-hand side, which in turn conceals Gala’s bathroom. 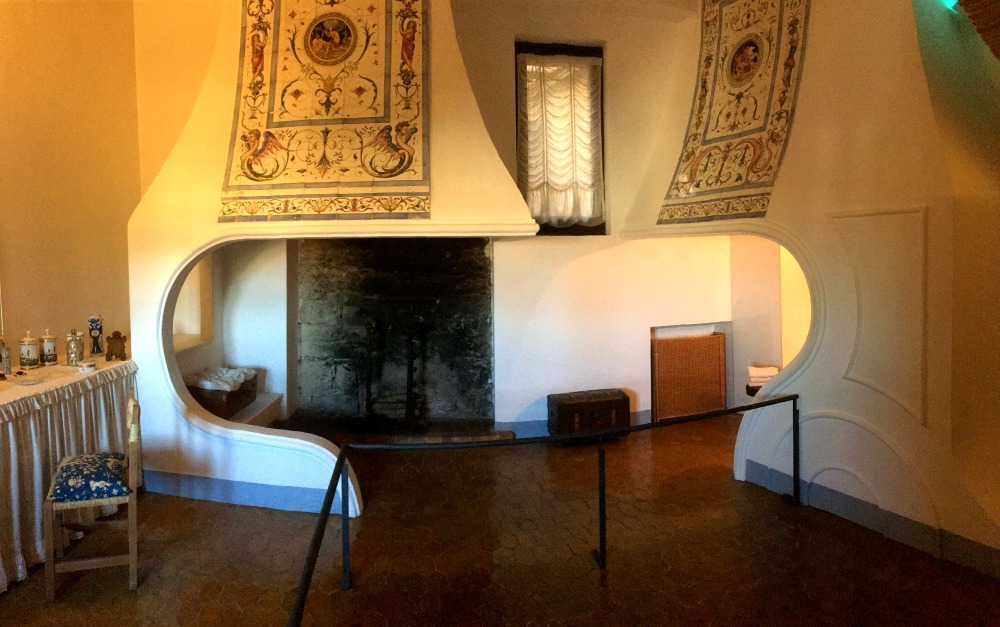 Gala strongly disliked all modern things and wanted them to be covered up. Dali had a sense of humour and covered up the ugly, modern radiator with a door covered in a painting of radiator. 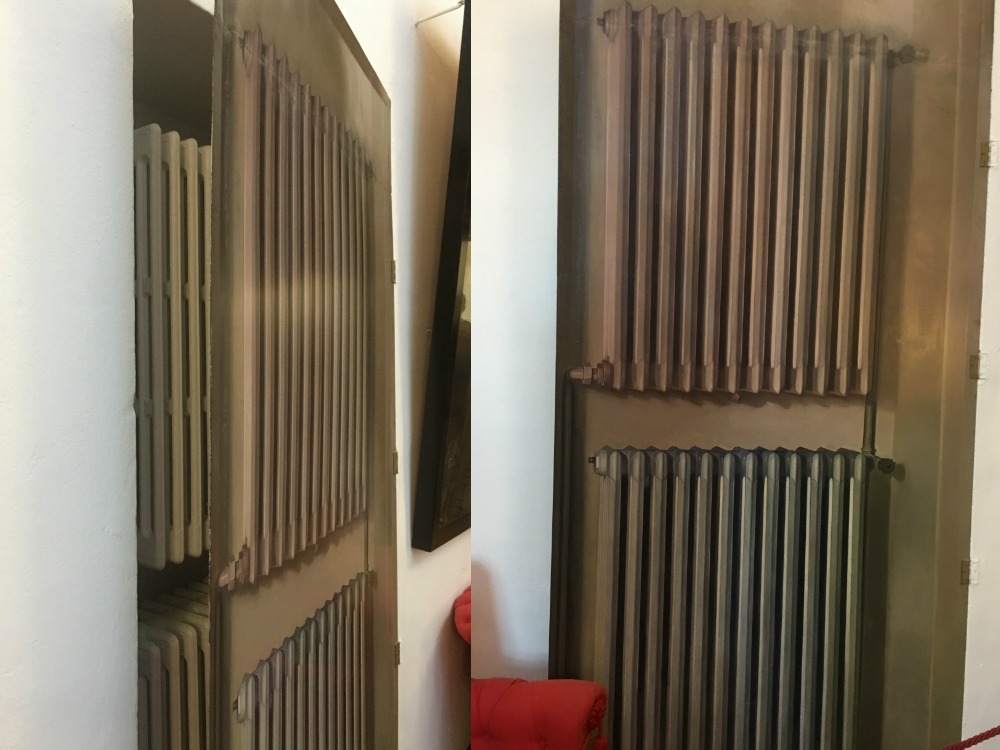 Dali ‘covers up’ the old ugly radiators for Gala. 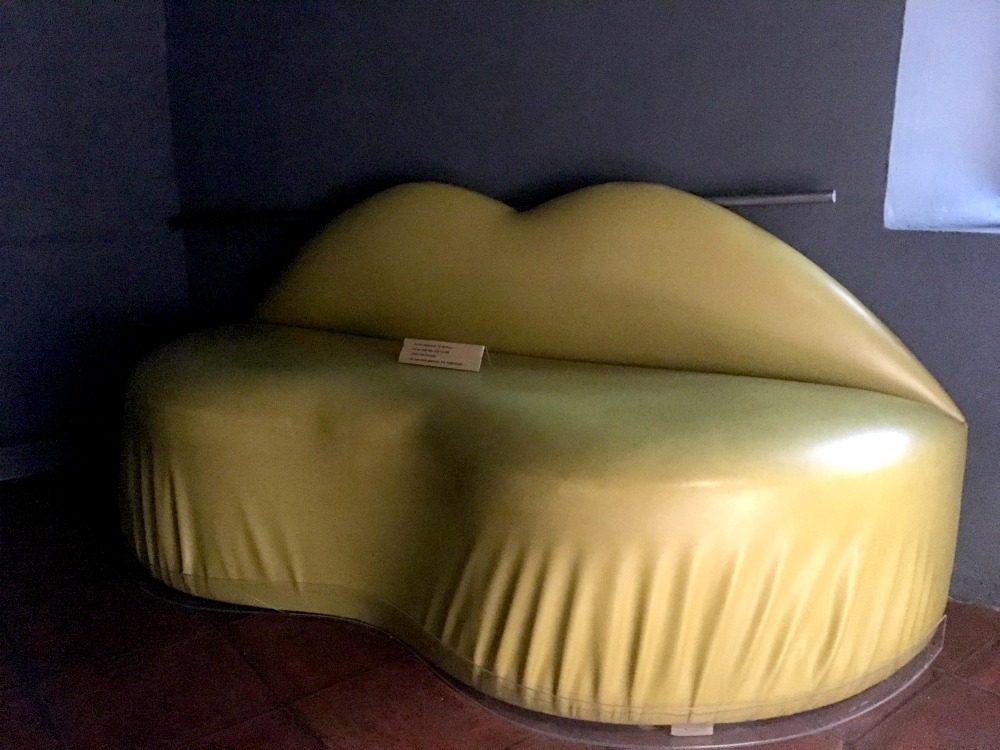 One of the four Mae West lip sofas. The most famous one is in the Mae West room in Dali’s museum in Figueres

The garage houses the cadillac which Dali and Gala bought in the States and had shipped across to Europe. Gala used to drive it down to their home in Portlligat until she became too wary of the twisty, narrow, windy roads and was  eventually driven by her chauffeur. The car was used to transport Gala’s body from Portlligat to Pubol following her death. 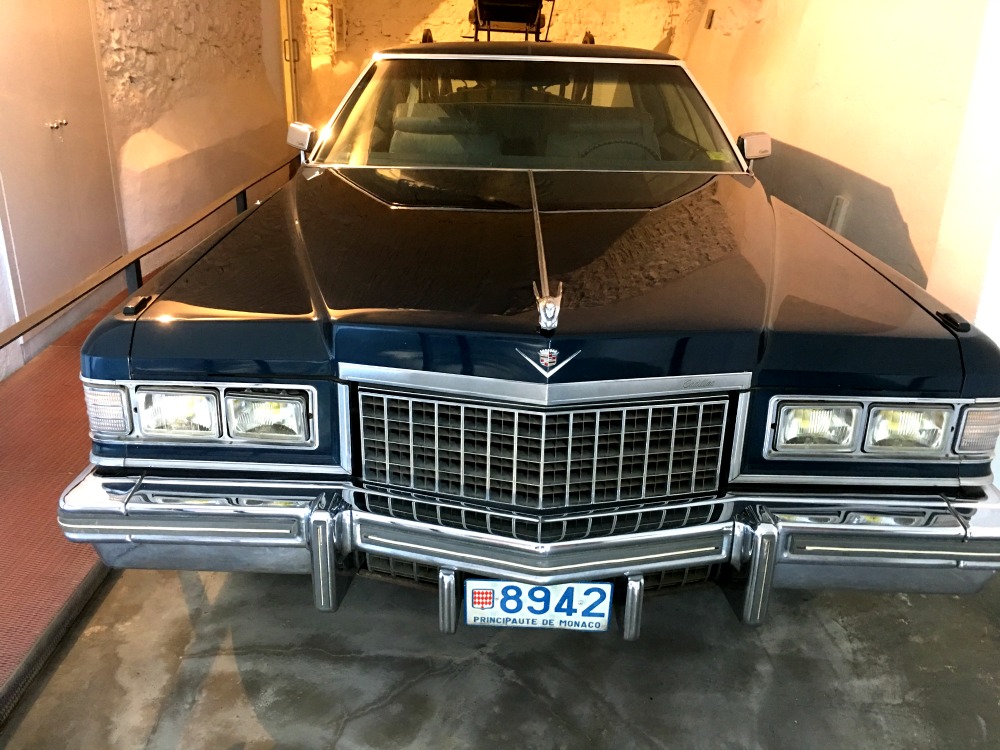 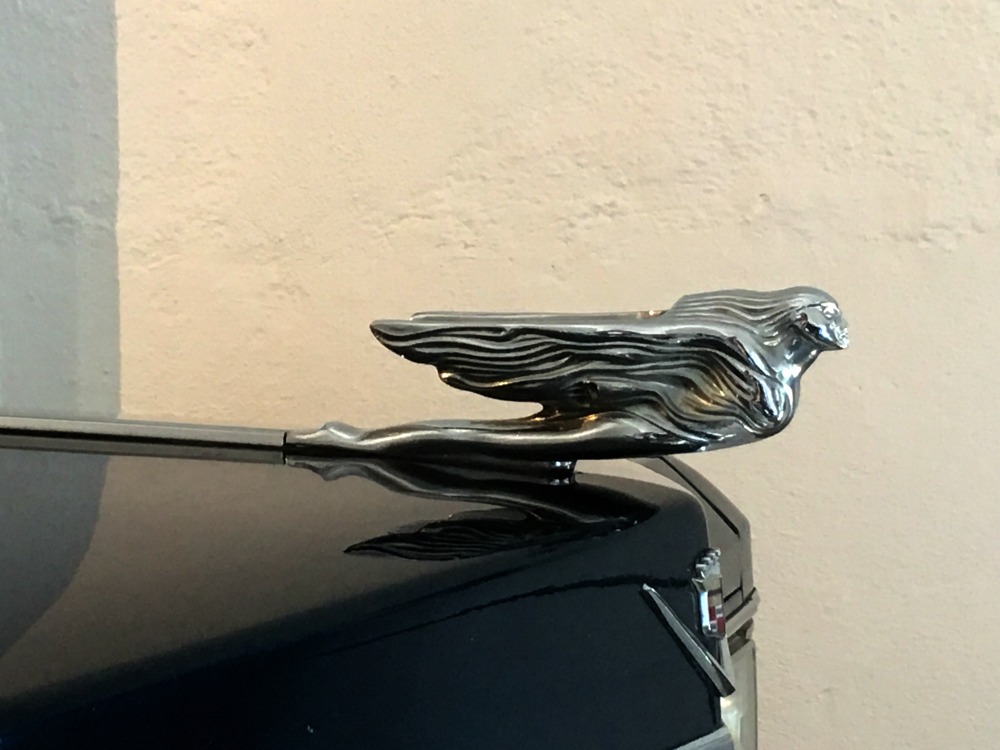 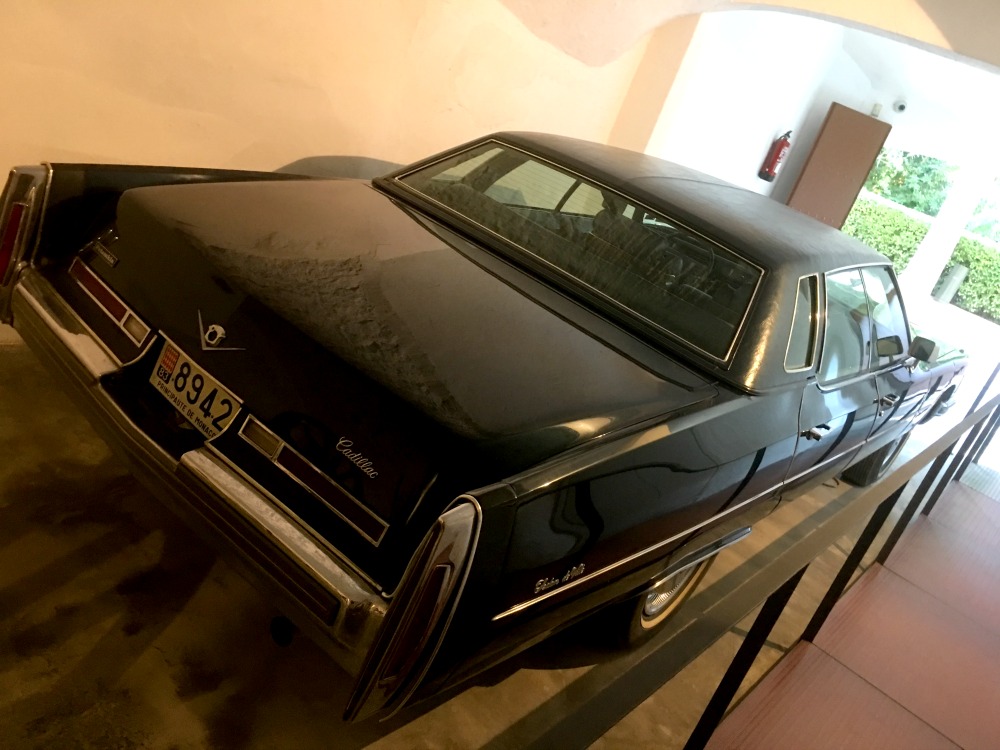 The cart or ‘calash’ was apparently left by the previous owners. It only came out once for a photography session with Vogue, a time when the pair famously paraded round Púbol – Gala at the front, in charge, and Dalí, like her servant at the back. In Dali’s words ‘I am behind, as servant of Gala, while she leads everyone, whip in hand‘. 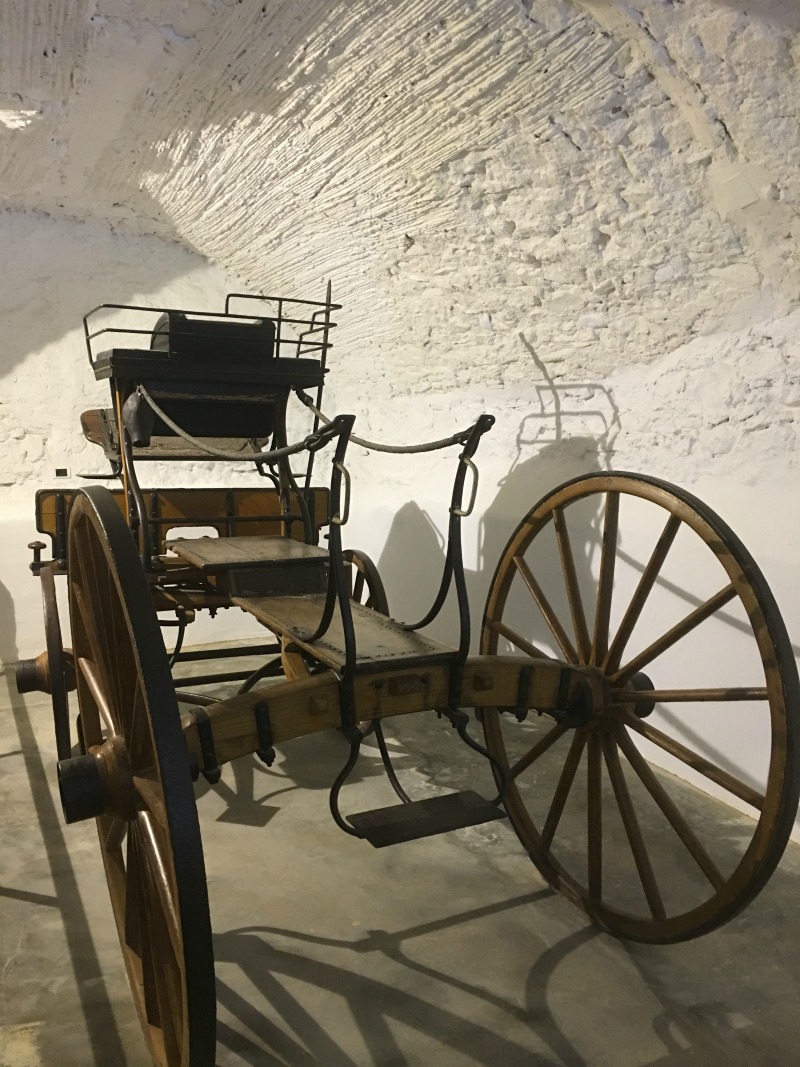 The Grounds of the Castle

Gala loved Italian style gardens and roses. Again, Dali was heavily involved in designing the gardens and worked himself on creating the long-legged elephants. 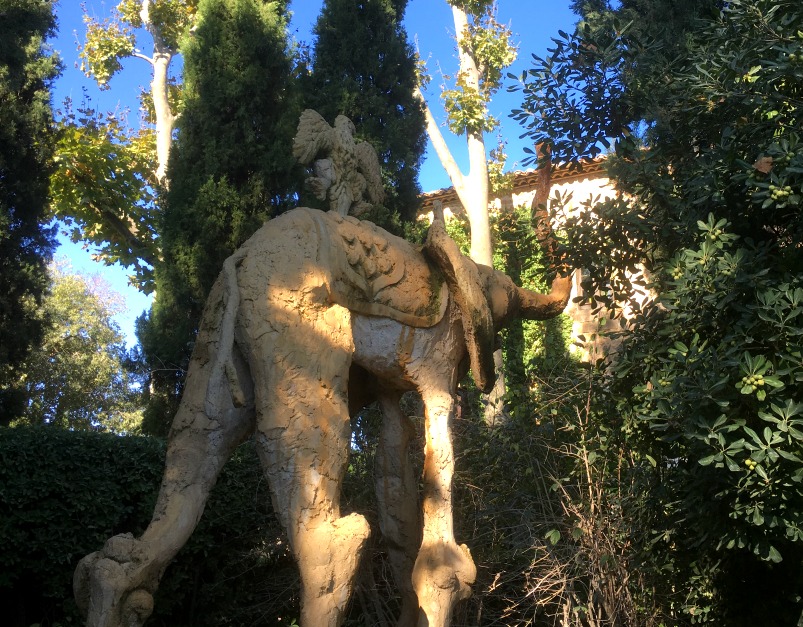 Along with the Cadillac, you will also see a Datsun. It was a gift from Datsun to the Dalis. 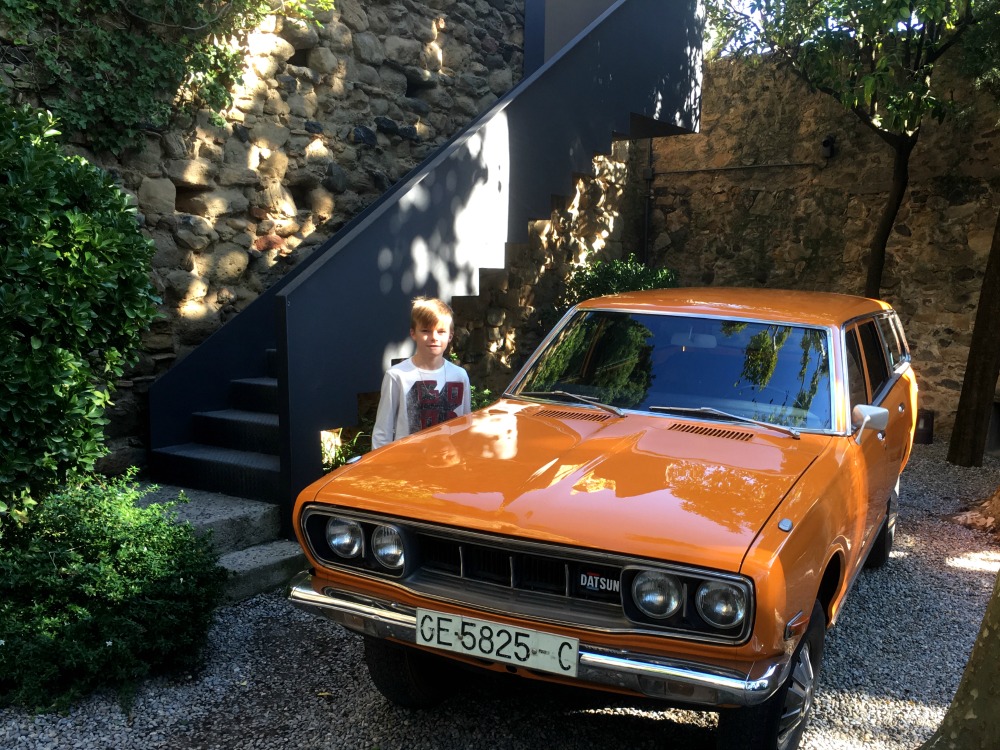 The Crypt: Two Tombs, One Body

You will notice in the photograph below that there are two tombstones. One for Gala and one for Dali. Surprisingly, only Gala is buried there. Apparently, the mayor of Figueres claimed that Dali had told him he wished to be buried in his museum in his birth town of Figueres. According to the book ‘House Museum Gala Dali Castle’ by Antoni Pitxot, Gala and Dalí had promised the castle and the Theatre-Museum to each other in 1968 and had also agreed that the two settings would be their respective pantheons. 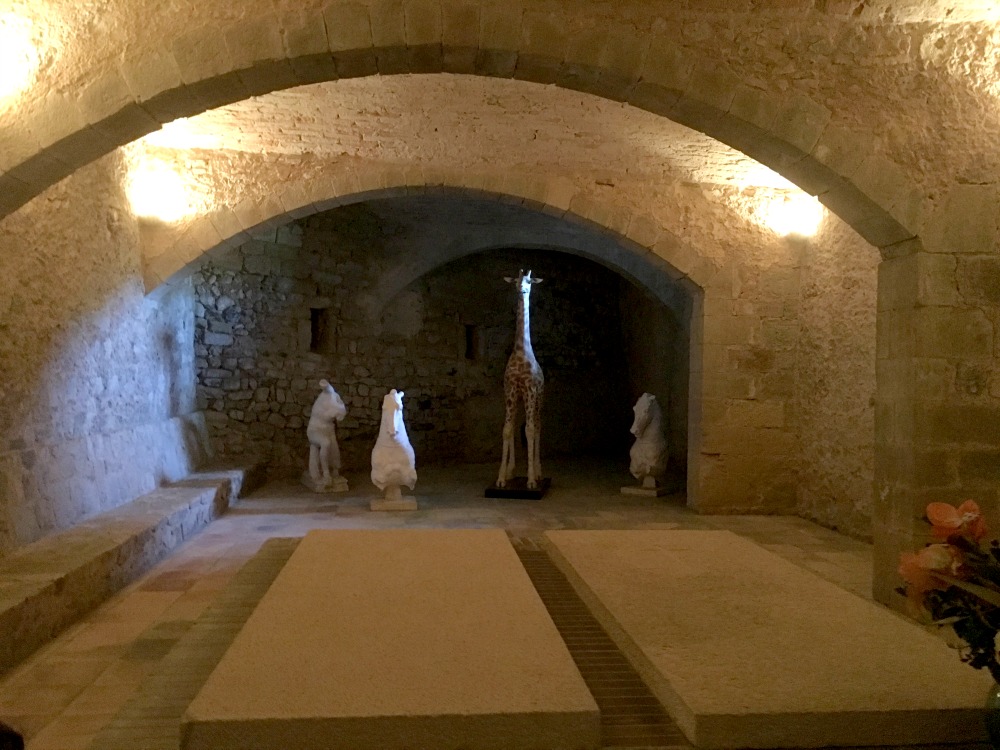 Check out the giant chess pieces in the background.

After Gala died, Salvador Dali moved into the castle of Púbol to be closer to his muse. One night, however, he was badly burned after a fire broke out in his room. After this incident, he moved into the tower of the museum he had designed and created in Figueres. 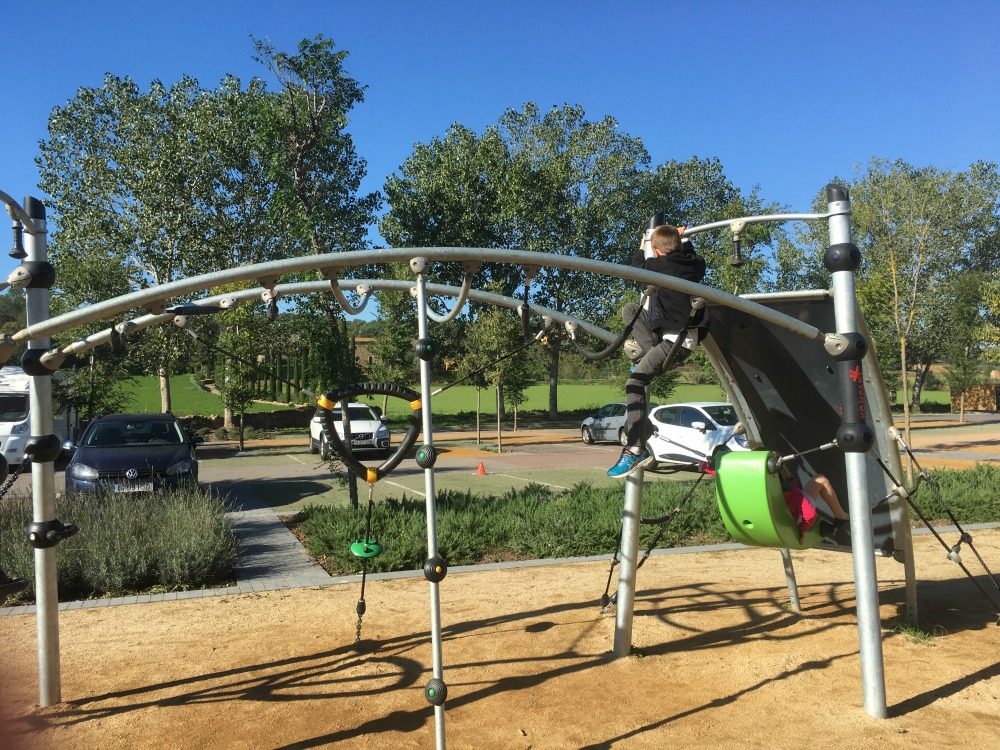 Great spot for kids to burn off some excess energy!

Have you visited Gala’s castle in Púbol or any of the must-visit Dali sites?