You are here: Home / Travel / France / Discover Perpignan and Collioure – 48 hours in the Med 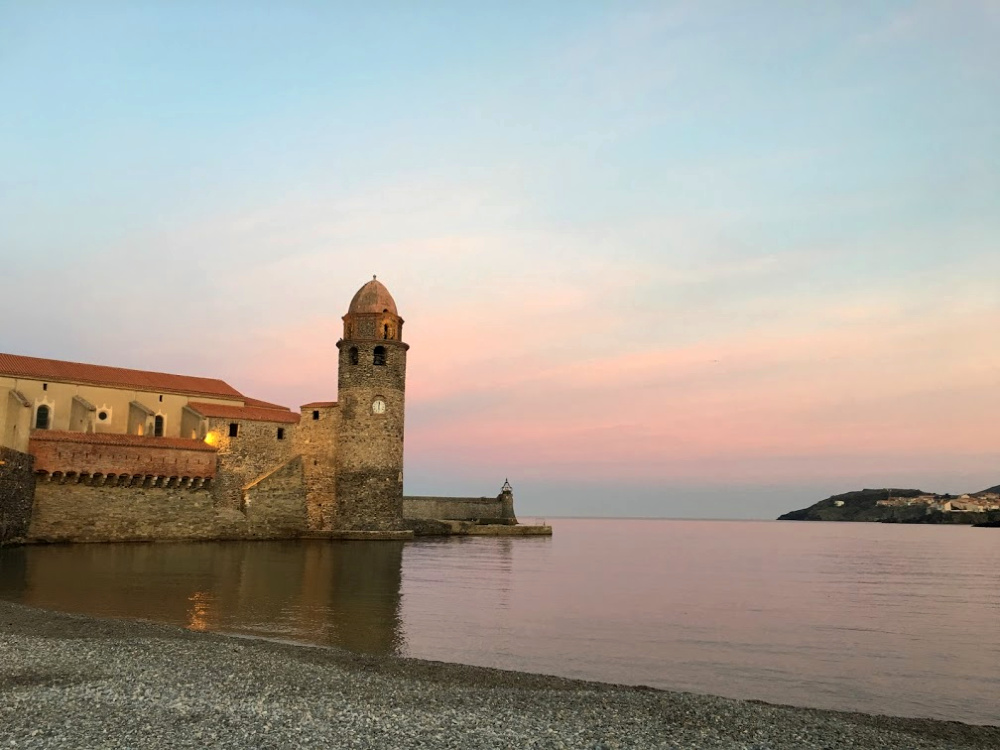 It’s that time of year again – January – time for our week-end escape from the dreary, cold and rainy weather. We decided we were going to explore the Mediterranean town of Perpignan and nearby Collioure. My husband found a great aparthotel in Perpignan, situated only 4 hours away from our home in the Dordogne. It was right next to the train station, the place that Dali believed was the centre of the universe! Read more about his revelation here.

Centre of the Universe according to Dali!

The aparthotel was great value at €65 per night for 4 of us – it was really spacious and provided a secure underground car park. Its location would make it a great base for anyone arriving in Perpignan by train. ALSO, we discovered that there is a fast train (TGV) that departs from there and will get you to Barcelona in 1hr 20 minutes. What a fantastic day trip that would be!

Apparently Perpignan has an average of 300 days of sunshine a year and we were indeed very lucky with the weather. The sun was out in all its glory – bliss!

On the Saturday we walked into town, an easy and leisurely 15 minute walk with the children. We explored the old town and enjoyed coffees on the terraces. Perpignan is the French capital of Catalunya and still holds very strong ties with its heritage. This is particularly noticeable through the influences on its gastronomy and the town’s architecture. Pretty sights in the streets of Perpignan

We explored the Castillet – originally a fortress and a town gate. It later became the seat of justice and then the city Jail. Today it houses the Catalan Museum of Arts and Crafts. There were some amazing views towards the Pyrenees. We visited the imposing Palace of the Kings of Mallorca, which was just a short walk from the town centre. The Palace dates back to the 13th Century when this part of France actually belonged to Spain. You will notice the Spanish influence in the architecture of this building – very different to French chateaux. Before you enter the Palace, make sure you take in the magnificent views from above of Perpignan and the snow-capped Pyrenees in the distance. Stunning! The rooms inside are mostly empty, however, the architecture in itself is very impressive. We particularly liked the small chapel. The entrance fee is very reasonable at €4 per adult and free for under 12s.

We also visited the main Cathedral of Perpignan – St Jean-Baptiste de Perpignan. You can see its impressive clock tower from the top of the Castillet. It was begun in 1324 by King Sancho of Mallorca and was built in the Catalan Gothic style due to its association with the Kingdom of Mallorca. Miss 6 decided to join a christening party during our visit! She was rather intrigued by the whole ceremony.

Another one of the great things about Perpignan is its proximity to the seaside and the lovely beaches that lie along this stretch of the Mediterranean. We opted for a visit to the idyllic coastal town of Collioure – only a short 20 minute drive away. This is one of my favourite places ever! Matisse and other artists spent a lot of time here and you will quickly see why. Parking can be tricky, especially from spring onwards and you may need to park a short walk from the town centre

We went for a walk on the beach and the coastal path, the children played on the seafront playground and checked out some of Matisse’s favourite views. The children skimmed stones whilst we sipped our apéritif on a seaside terrace, all the while watching the sun set. Truly magical.

We would love to go back and explore more of this beautiful region. Some day ♥