You are here: Home / Create / Counting with Walnuts

We really enjoyed making our Autumn Trees and after they had been displayed around the house for a little while, I thought we could use them for some more fun.

We live in a part of rural France where there is an abundance of walnuts on the ground during the months of September and October. We had been busy collecting them after school and drying them out. I thought it would be fun to combine their trees with their stash of walnuts to do some numeracy exploration.

Firstly, I customised their Autumn trees slightly by adding numbers and corresponding dots onto the side. I then stuck the tubes into some plain playdough to avoid them moving around too much and set up an invitation to explore by placing a bowl of walnuts next to the numbered tubes. 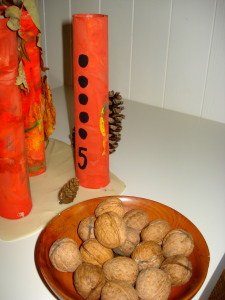 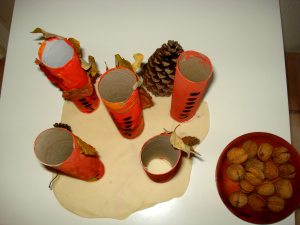 Miss 3 enjoyed playing with the playdough base the most though I think!